This past weekend I had the good fortune to attend L.A. Comic-Con (formerly called Stan Lee’s Comikaze) at the LA Convention Center. There were things about it I liked instantly when compared to my newbie experience at San Diego Comic-Con earlier this year. I had heard profiles of it as a convention when it was referred to as Stan Lee’s Kamikaze and press was quite positive as people had tired of the intensity and shift away from comic bookiness that San Diego underwent before returning to its roots (as I have heard it has in recent years). 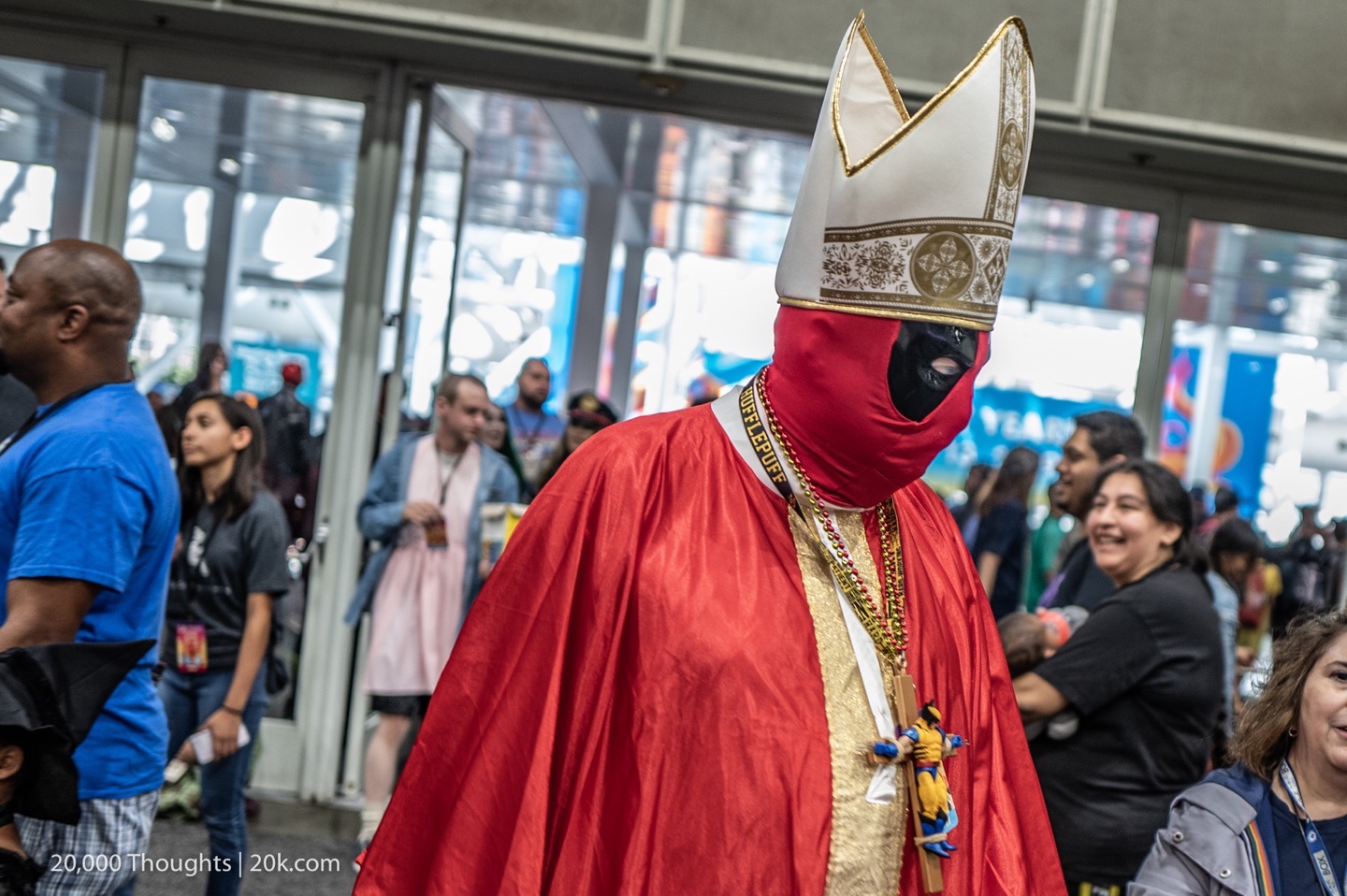 The size of the exhibition hall at LA Comic Con DWARFS San Diego. Stepping into the hall space I was instantly relieved by the fact that I could see the floor I was standing on and wasn’t getting sliced up by unavoidably rubbing shoulders with the hard cut cardboard and foam core edges of hastily made Iron Man cosplay suits.

SIDENOTE: Please give up on making Iron Man suits. Please. I’m begging you. Nobody is making a decent cosplay Iron Man suit. They are all truly terrible. Robert Downey Jr. does the movie in a leotard and then they CG the thing over him. The only good one I’ve seen is the one at Disneyland and that guy can’t see where he’s going let alone sign an autograph book.

I digress. The size of the West Hall at the LA Convention Center is a superb place to a Comic-Con. You can breathe, you can walk freely, and because of that space, you can easily photograph all your favorite sexy cosplayers…which brings me to my next point. 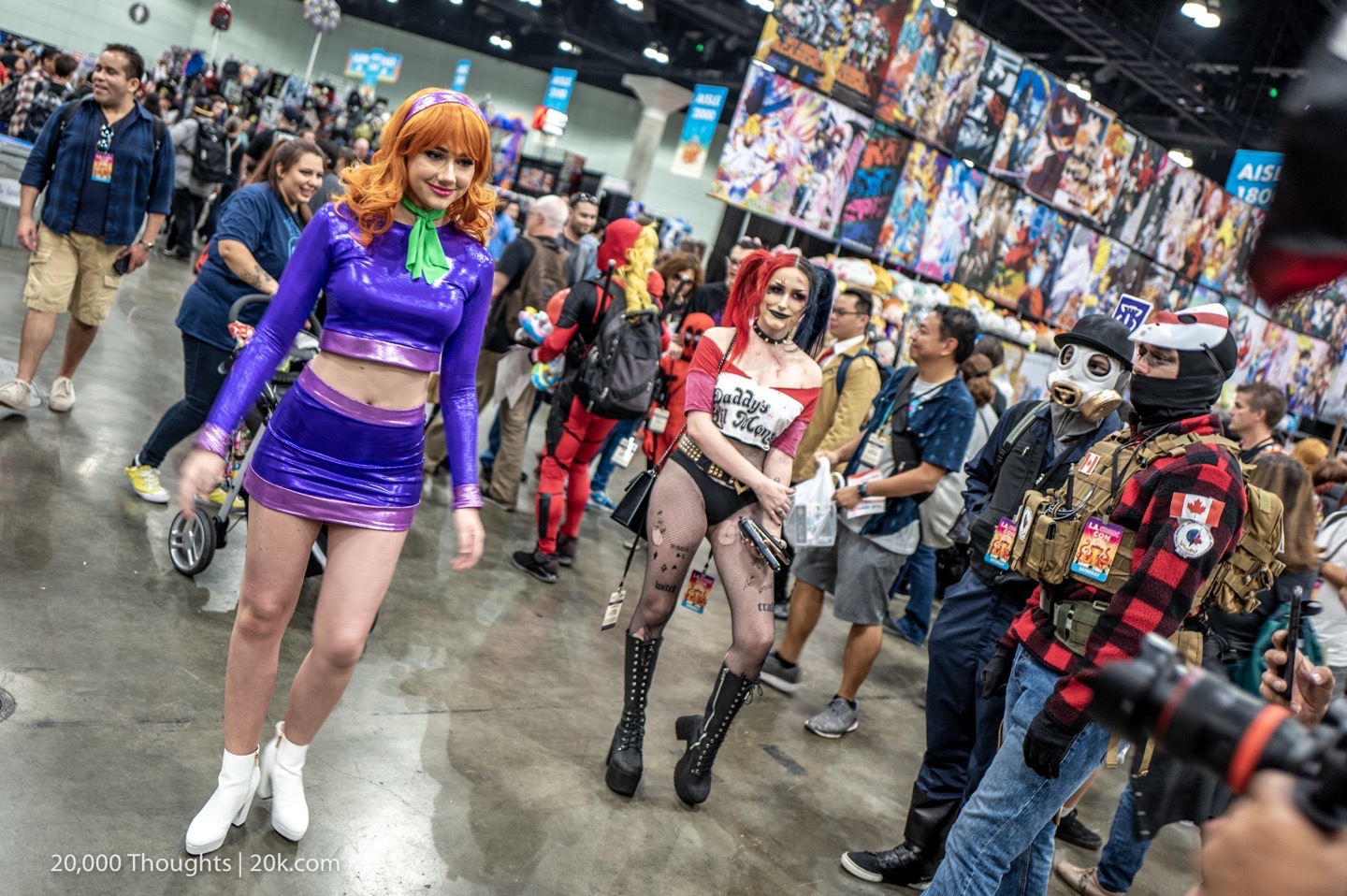 One of the things I couldn’t help but notice in San Diego was pretty much a total absence of the fabled “sexy cosplay con girls” whom had helped save SD Comic-Con from going under about twenty years ago. I primarily observed a lot of shirtless dudes representing the male superhero contingency. HOWEVER…LA Comic Con’s scantily clad female superhero population’s cup runneth over. It runneth over a lotteth. You couldn’t walk much more than six feet in any direction without spotting a cosplay girl along with her nice guy friend ( who’s madly in love with her and afraid to say it but thought if he made her an amazing sexy cosplay costume…it would be clear) who was there to carry her iPhone (since tactical lingerie, bikinis, and leotards aren’t provisioned with cellphone pockets) and snap instagram pics of her all day. They were EVERYWHERE, and if you live in the real world, then you know (or must grudgingly admit) that this is a draw for a lot of people (be they men or women, boys or girls).

This means people are far more likely to be in costume mode and access to costumes in general tends to be a lot better than it is in the middle of July. Parties, work costume contests, and Halloween itself all have fans on track to create something that this going to impress, entertain, or inspire laughter, and LA had it in spades in a way San Diego did not. Also, while San Diego relies largely on an influx of tourism to sustain Comic-Con, LA is more of a local crowd. The point here is, it’s hard to pack a Warhammer 40,000 soldier costume (even in checked luggage), but if you work in makeup effects in LA, you probably have, or know a friend who has a Scion xB that you can cram all the armor pieces into to drive to the convention center. 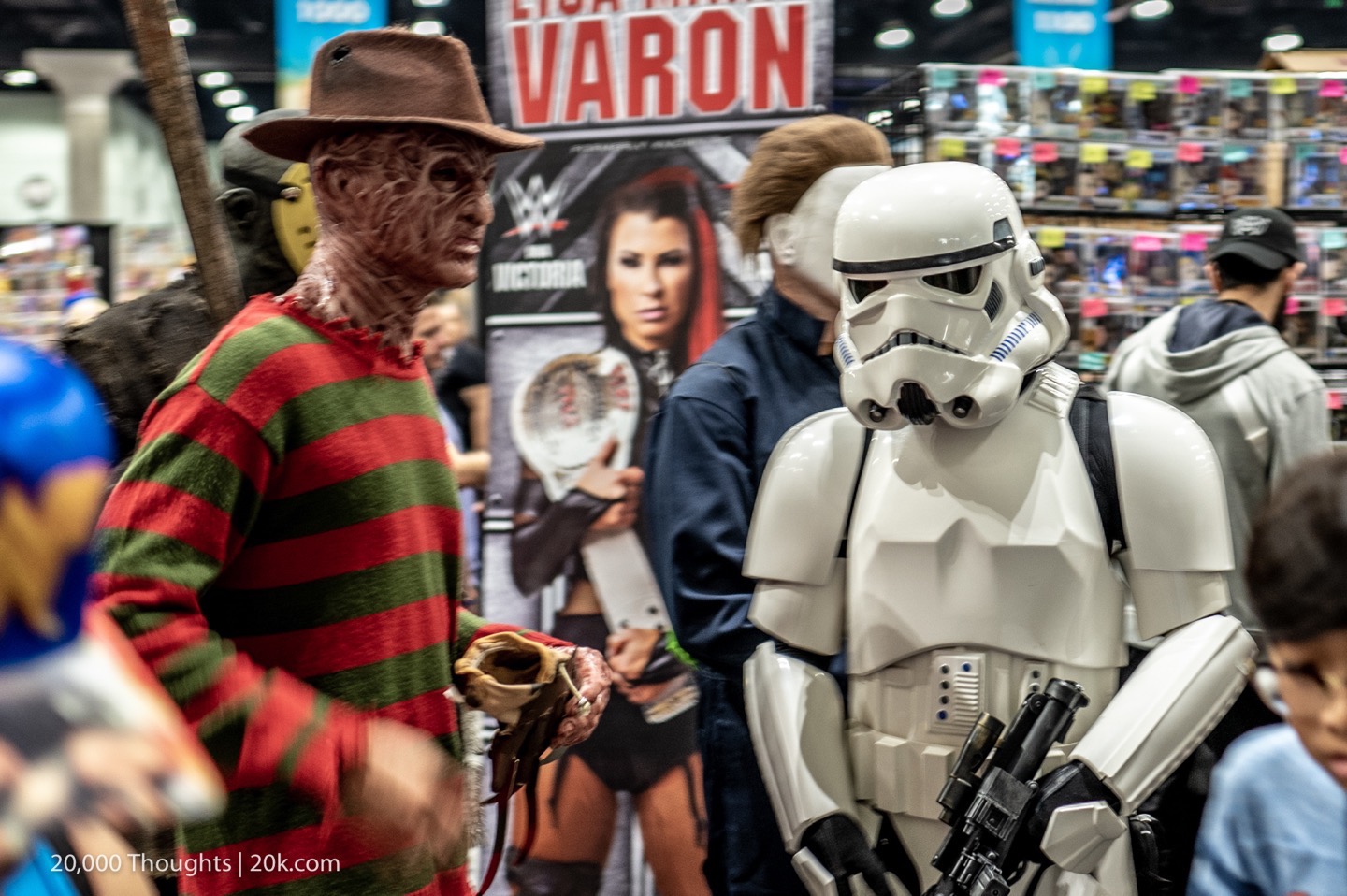 I’d be lying if I said San Diego didn’t have stunningly beautiful weather. But I’d also be lying if I didn’t acknowledge that climate change isn’t our friend in July, and that makes it scorchingly hot. So hot I think I got a sunburn INSIDE the convention hall. This makes it rather unpleasant for first timers to visit the various installations across the street from the convention center in down town San Diego and the gas lamp district. It also makes dressing up in cosplay made of rubber, foam, fiberglass, and vinyl (not to mention makeup) pretty unappealing, which to me explains the better cosplay in Los Angeles. The cool weather aligning with the Halloween season is a match made in heaven.

Think about it for a moment. San Diego Comic-Con can be an intimidating proposition. With it being the summer months and school being out, not to mention its long rich history, and industry connections/affiliations, there is work that goes into attending San Diego Comic-Con that you could argue isn’t fun. It’s work. This along with just the sheer volume of people in attendance and the amount of advance notice that has to go into planning your visit really is a detractor. With LA Comic Con tickets were available the day of attendance as was parking. Add to that the more spacious exhibit hall and litany of nearby retail, dining, and entertainment offerings that were not taking over by the convention (and thus still usable for their intended purpose), and one can see how LA is a more attractive proposition.

Having written all that, there are of course, reasons why LA Comic Con will never ever ever usurp San Diego’s throne, and they are…

San Diego Comic-Con is The Godfather of comic book/sci-fi/fantasy conventions. You don’t simply unseat it by having elements of your convention that might be deemed objectively superior, much like a Volvo, no matter how nice it is, is ever going to take the place of Rolls-Royces in rap videos. You don’t just take over the mantle from a convention that’s alive and well after fifty years of events. So now matter how much someone may like LA Comic Con. The granddaddy isn’t going anywhere. 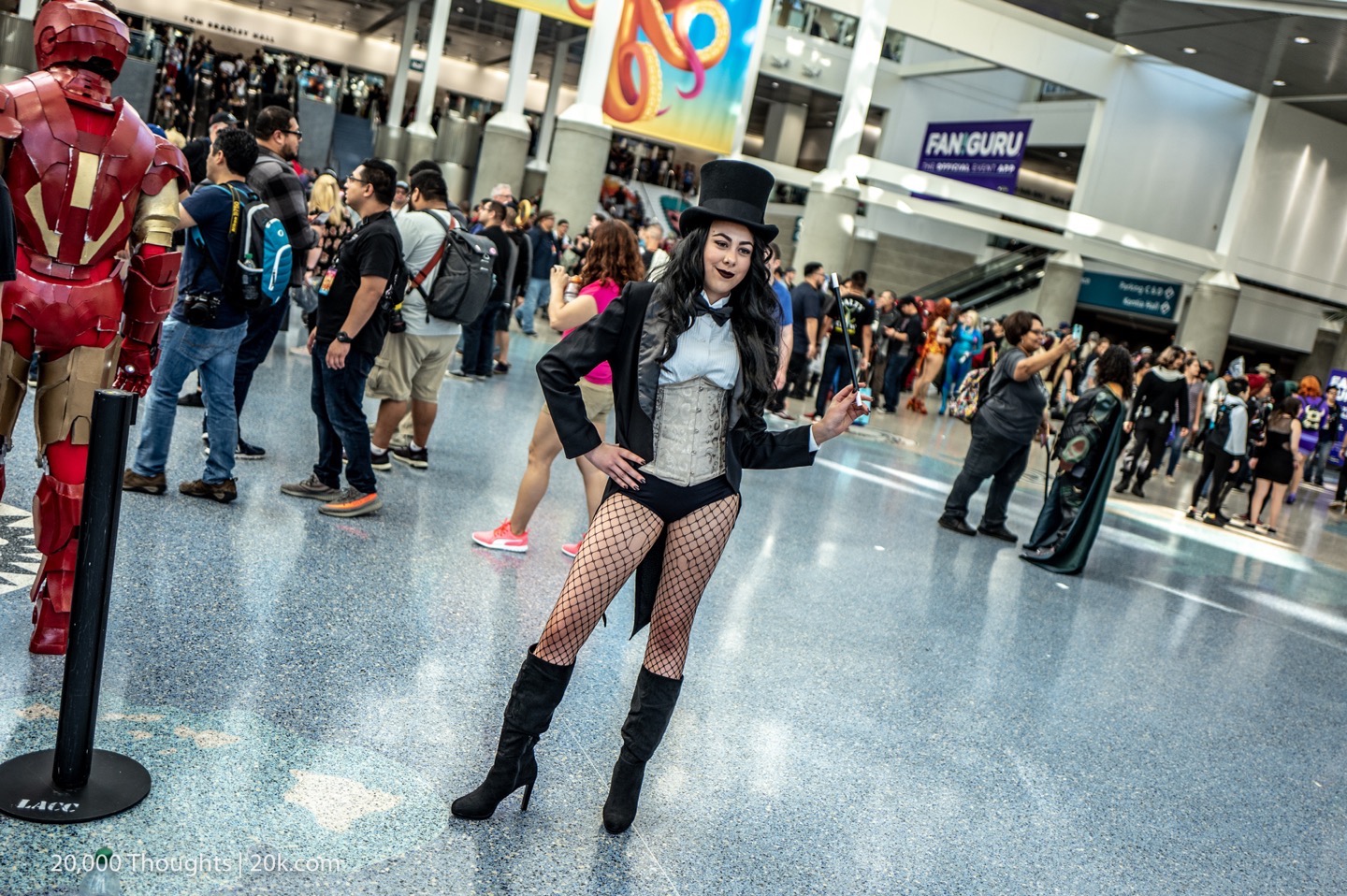 Just because my delicate snowflake butt can’t deal with a little sun doesn’t mean other people don’t relish in it. People come from all over the world to San Diego Comic Con and its location right on the water is, to the other 199,999 people there besides me, probably the best weather they get to experience all year, especially given the tourism draw from other parts of the country and world beyond Southern California.

This is purely speculative on my part because I’m not cool or an “influencer” and friends never invite me to Halloween parties, but Comic Con cosplay and Halloween costumes may not be considered to be the same thing and as such, there is no connection between the appeal of LA Comic Con being close to Halloween, and San Diego Comic Con being in the middle of summer. Nowadays, Halloween costumes usually fall into the category of bad, funny, or sexy, whereas cosplay costumes typically strive for accuracy or creativity. While I may not have seen as much cosplay, it did tend to be better and bespoke. We’re taking quality vs quantity. The majority of the cosplay at LA amounted to Amazon Prime superhero unitards like Spider-Man and Green Lantern, as well as some higher quality stuff too, but for the most part, it was store-bought leading me to the conclusion that everyone was more focused on their Halloween parties than they were on this convention. 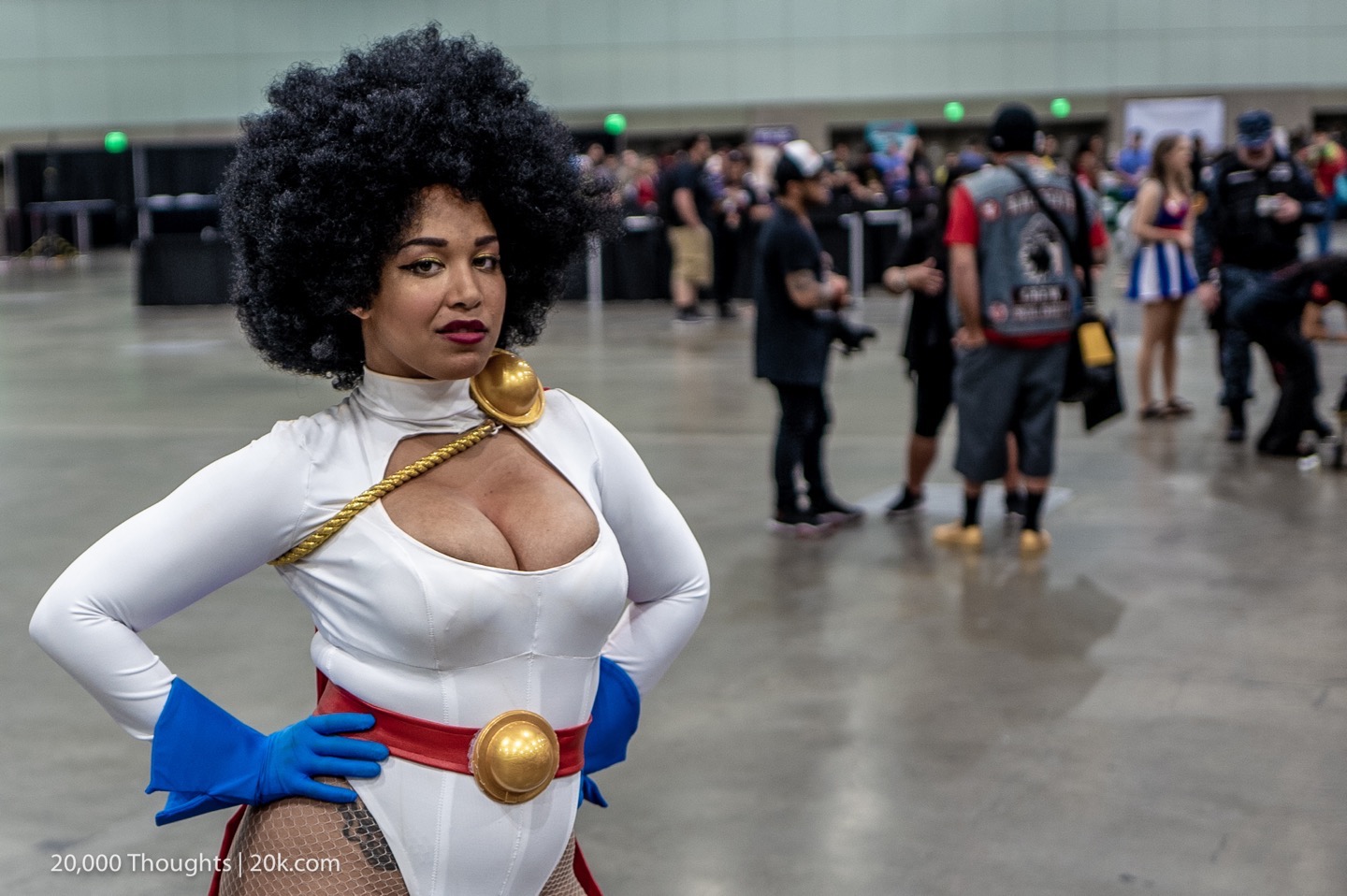 There’s nothing wrong with flipping and paying big hunky guys to show up as Wolverine and that bald bearded pale dude with the red stripe painted across his six-pack from that video game I don’t play. For one thing it’s nice to have ladies in attendance who are actual fans of comics in San Diego to keep it from becoming a total creep-fest and there being an expectation that it’s all about the meat market (Disclaimer: it’s not) for nerds who normally couldn’t get girls to pee on them if their heads were on fire. No I’m all for the Chippendale strategy San Diego has taken to bring things back into balance. This is a good thing for everyone. 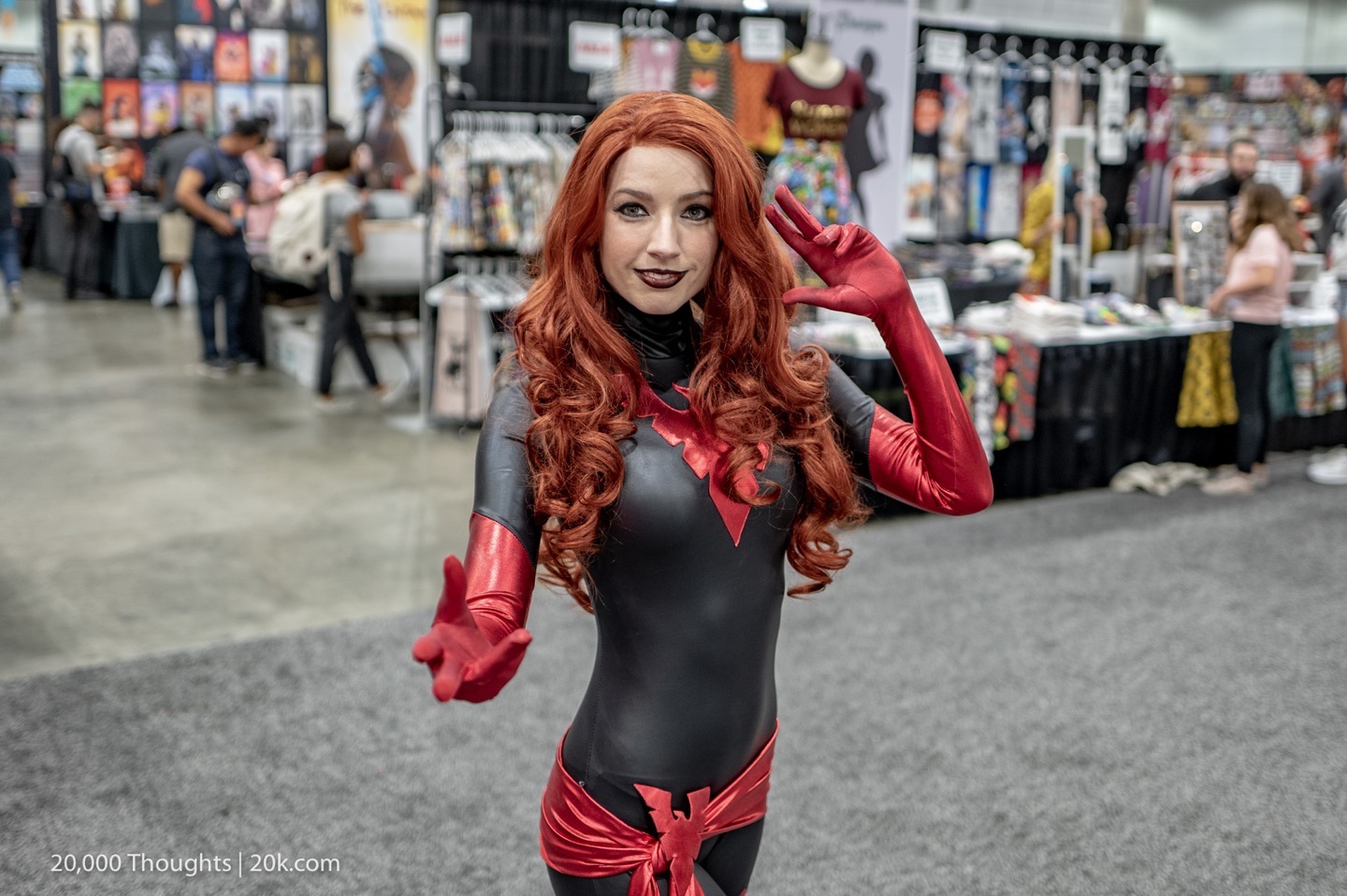 San Diego Comic Con’s physical exhibition hall space may not be on par with LA’s, but boy-howdy does this ever speak to the phrase I repeat to myself every morning: It’s not the size that counts, it’s how you use it. The vendors and exhibitors in San Diego are industry heavyweights who build out impressively massive booths(?) on par with any car manufacturer at an auto show. On top of that, San Diego acknowledges the intimate size of its exhibition halls and has spilled out into the gas lamp district with some truly incredible experiential installations that there is no way LA could pull off based on its surroundings. That is, after all, the reason to go to San Diego (well, that and the panels). it’s not to shop. You can really do that on this thing you’re on right now: The internet. That’s if you really need any of the stuff that’s being sold in the exhibition hall anyway.

I guess what I’m trying to say is, I have no idea if LA Comic Con is better than San Diego Comic Con or vice versa. So you might as well just go to both because you’re going to have a great time either way. 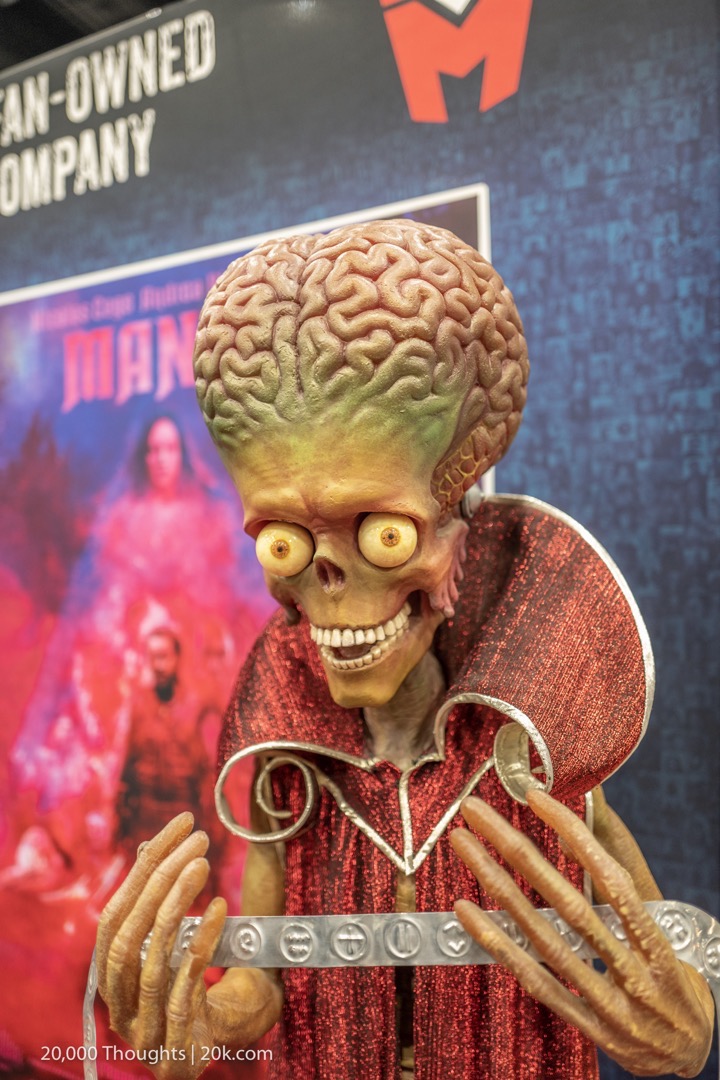