Do you recognize this? It’s a viral internet thing. It is literally a giant walking, roaring, fire-breathing dragon. Yes, walking. It doesn’t have a pole impaling its belly that leads to a parade float chassis and wheels. It walks on its own four legs. Have I emphasized enough that this dragon walks? It is downright impressive and as nearly as I can tell, unique.

Some of the more well-known and internet famous titan-sized puppets include the Walking with Dinosaurs touring show and Les Machines de l’île in Nantes, France, but the puppets built for both of those experiences rely on very obvious supporting structures to accomplish their appearance of walking.

This particular dragon (Fanny), requires no such cheats and can trot around on its own, free from any wheels or articulated trusses welded to it. I would not count on winning any dressage competitions with it (cue the Beach Boys), and for long distances, it gets lazy and lies down on a custom built sled that ferries it from one location to another, but still, it has balance and coordination and that makes it unique in the world of live entertainment.

I discovered Der Drachenstich, like many other cool things I’ve come across, on a social media platform on the internet . You know, the type of video which is light on info, and heavy on likes, until you get the 560th comment  where somebody finally identifies what’s going on. I don’t use social media much any more, but this is one time it came in handy.

The show is an annual tradition dating back about four hundred years in the Bavarian town of Furth Im Wald. Performers recount a tale that has something to do with a battle between Bohemians and Hussites and then, all of a sudden a dragon shows up and lays waste to the land and a young lady with magical powers can save everyone but first a brave man has to spear the dragon in head so she can use her powers?

It’s not what I would describe as tight storytelling and it could use a lot of work. Given that there’s a dragon involved in this, I don’t think anyone would be too upset if changes were made to make things a little more sensical because, well, dragons aren’t real, so it’s not like facts matter. Der Drachenstich only recently added an English translation to their site and it is a bit rough, likely pulled from Google Translate (can’t blame anyone for that, it’s so handy), but it doesn’t help all that much to clarify things either.

But who cares? It’s an awesome dragon. It walks, it breathes fire, and the overall show the town puts on is really fun, even if I fell asleep a few times during the non-dragon bits. I blame this on my own lack of worldliness and multi-linguality as I cannot understand a lick of the German language. I travel to Europe enough; I should find a way to learn it. I thought that Google Glass would help out, but it turns out that its ability to translate text into English via augmented reality is proportionally offset by its ability to make you be hated by everyone around you who brand you a creep and weirdo for wearing it. Your relationships suffer, and you run the risk of assault. To be fair, sometimes Google Glass took spontaneous pictures, which meant in bathrooms. And that wurst you see? It was delicious, if you like curry ketchup…and sadly, I learned I do not. The beer and chips on the other hand were phenomenal.

As usual, I digress.

Suffice it to say I cannot really tell you more about what actually goes on in the show until a knight on a horse starts riding up to the dragon and whacking it on the leg with a sword as peasants stand by watching. After a few gallops’ worth of back and forth whacking, the hero slowly canters up to Fanny, climbs up on her, and carefully places his sword in a predetermined hole located on top of the dragon’s head. This whole might be a mount point in the hard fiberglass shell or a section of permeable material, but because nobody is over fifteen feet tall to see it. The hard body makes sense though, as dragons are known for having armor-plated impenetrable skin. It’s science, people.

I got into Furth Im Wald early, and discovered the Drachenmuseum, a little museum chronicling the history of Furth Im Wald, and Der Drachenstich. They even had on display the previous dragon that had been used for the event and the current one is definitely an upgrade. The previous dragon amounted to paper mache over chicken wire which was attached to a Volkswagen beetle. It was rough, but it was also likely a product of its time, so I shouldn’t be too hard on it.  This little town really gave this project everything it had in it. I have no pictures of it as it was too crammed into its storage space to photograph. I do, however, have video. 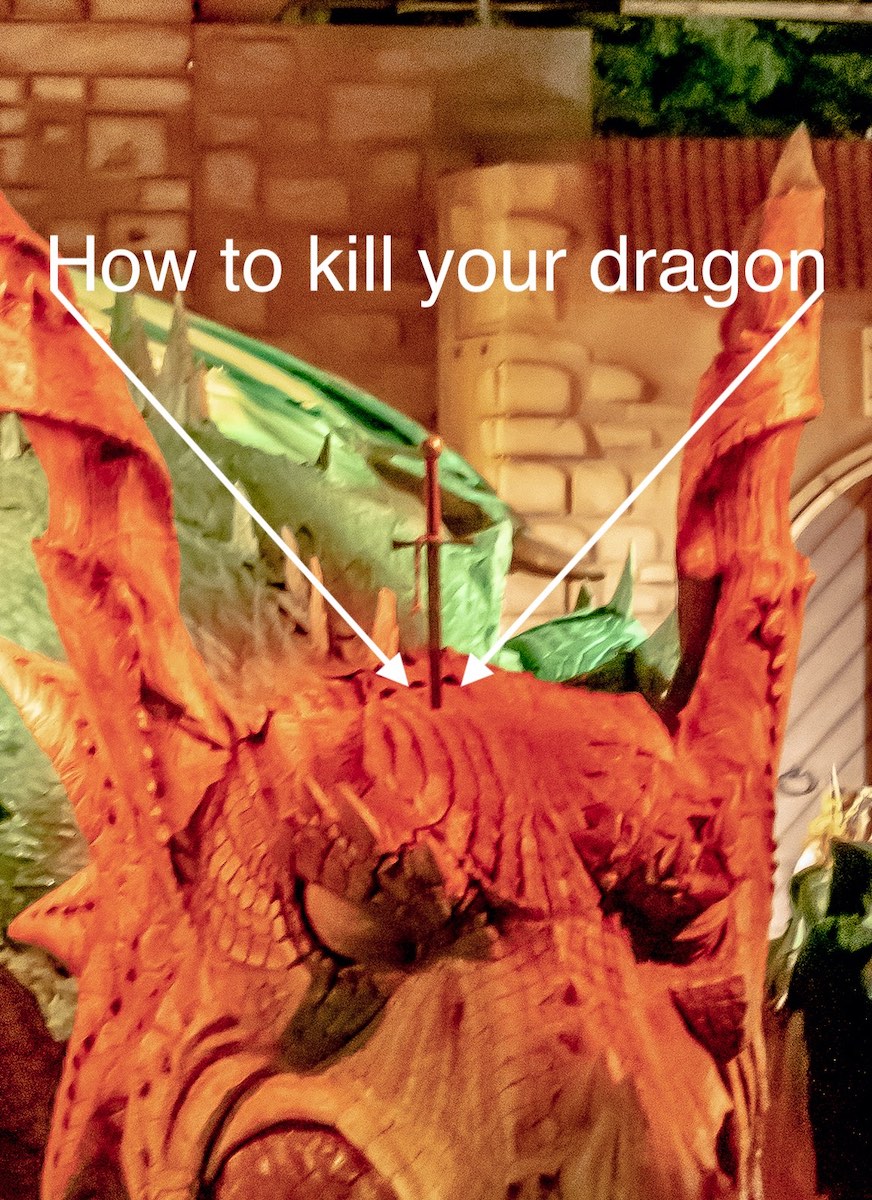 While inside the Drachenmuseum, cameras and video were allowed, but unfortunately, cameras were not allowed during the actual performance, and there was no way around that or playing the dumb American tourist who didn’t realize. Signs with crossed out cameras on them were all over the place. You would have to be blind to miss them. I considered that angle for a moment, but the only blind person who has ever gotten away with using a camera, was Stevie Wonder. I also thought perhaps I could sneak photos or video, but the Germans think of everything. They had spotters everywhere, and on top of that, the configuration of the theater was no format I knew of. Usually if a theater configuration doesn’t fall into any of the standard categories, people refer to it as “site specific,” but this calls for a new layout: Photographically Disabled. The theater itself is a converted street Furth Im Wald’s “down town” area with bleacher seats arranged in a “J” or “7” configuration, depending on how you looked at it, with the stage running the length of the long side of the J/7. What this meant was that spotters could hang out in the unoccupied area and monitor the audience the whole time for camera sneaking, without impeding the audience’s view of the performance. I have to hand it to them, it’s a smart way to do things if you don’t want the show to leak.

But before and after the show, photography and video was allowed, and when the show was over, they let everyone into the arena to walk up to the dragon and examine it. Interestingly enough, the components used in the leg joints resembled the exposed suspension pieces you can often see on lifted “off-road” show trucks driven by trust-fund American “bros.” Lots of polished aluminum gas shock absorber-looking things were under that dragon’s skin.

If I recall correctly, the dragon had five operators harnessed to touchscreen control things and they eventually walked Fanny back to her  dragonmobile which drove away. Seeing this animatronic creature do its thing was incredible, and I was only let down by my inability to understand German. But hey, it’s a tradition, and the people there love it, and it’s an entertaining show. Odds are a non-English-speaking German seeing A Christmas Carol for the first time would think the same thing. But then, A Christmas Carol doesn’t have a walking and fire breathing dragon, so I guess everything evens out.

Odds are a non-English-speaking German seeing A Christmas Carol for the first time would think the same thing. But then, A Christmas Carol doesn’t have a walking and fire breathing dragon, so I guess everything evens out.

And that’s what life is about folks: Balance.